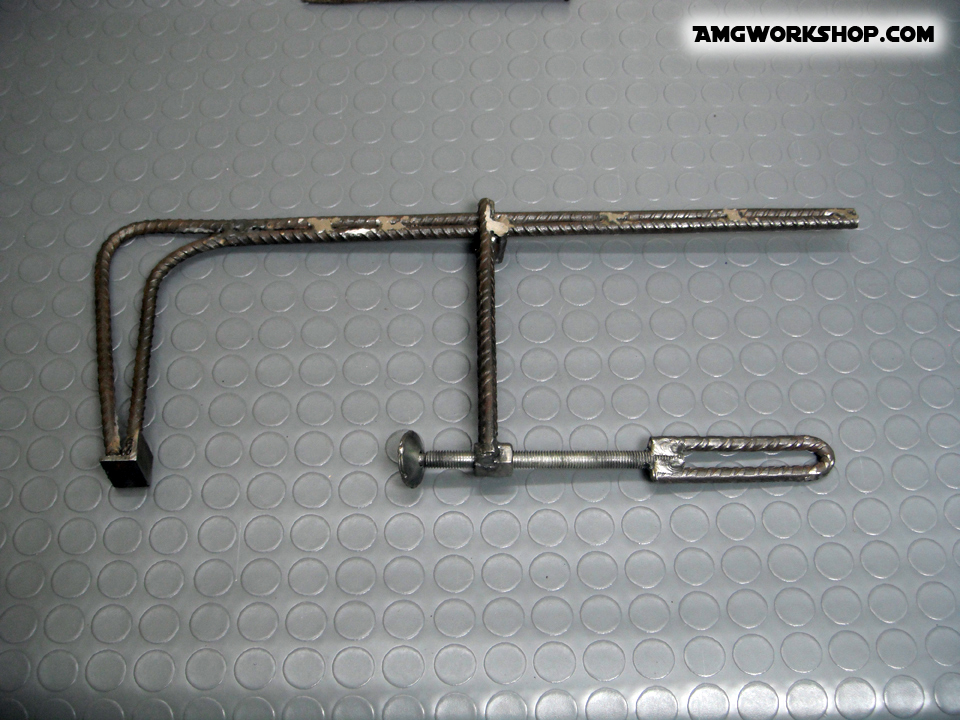 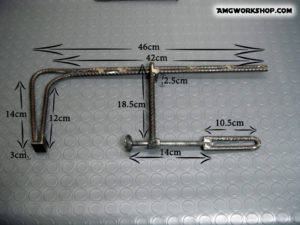 [table colwidth=”50|100″ colalign=”left|left”]
Name,Description
Ø10 Rebar, I used rusted one
M10 threaded rod, you can use a 140mm bolt
M10 coupling nut, i only used the halfe of it so tow normal nut would work fine
Ø30 washer, 2 of them with 7mm interior diameter
20mm angle iron, only 30mm is needed
[/table] 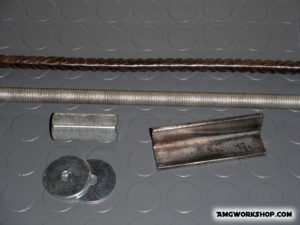 [table colwidth=”50|100″ colalign=”left|left”]
Name,Description
M10 bolt,
M6 bolt, And its screw
Cone nut, I took it from a bicycle axle set (a bushing would also work)
Spacer, I took it from an old HHD
[/table] 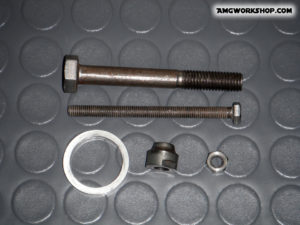 Making of the homemade bar clamp:

I put the two pieces on my welding table then i welded their ends.

Now we have what we will call the fixed jaw, so i clamped it in the vise to close the gapes then i welded it.

After that i grand off the sticking welds. 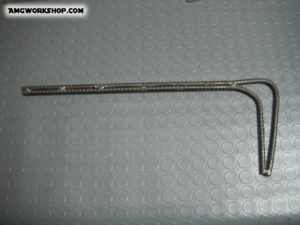 To make the sliding arm i marked the center of the 37cm piece and i aligned it with the M10 bolt i clamped in the vise, i heated it with the arc welder until it got red hot then i bent it.

I slid in the sliding arm i just bent in the fixed jaw, then i placed the 2.5cm piece (the clutch) next to it, and i held it with weight until i welded it in place.

I marked the center of the M10 coupling nut then i cut it with the hacksaw and removed the burr with a file.

I measured and marked 14cm on the  M10 threaded rod, i held it in the vise between to pieces of wood and i cut it with the hacksaw.

I measured and marked 5mm from one end of the screw i just cut, then i made a shoulder with angle grinder i clamped in the vise.

The most thing i liked on this homemade bar clamp is how the swivel came out.
To make it, i first made the cone washer, so basically what i did is deform a washer with the help of the M6 bolt, spacer and a cone-nut to become a cone washer .

I screwed the screw in the sliding arm and i clamp it in the vise, then i put the cone washer and i welded on the shoulder to prevent the cone-washer from coming out.

I closed the hole of the second washer with welds (Tip: lower the amperage) then flatten it with the angle grinder.

I clamped the cone-washer with the second washer in the vise and i tack weld them, then i grand off the sticking welds.

To complete the movable jaw the handle must be made, so i did the same as for the sliding arm, i marked its center then heated it with the arc welder and bent it.

I screwed in the crew in the sliding arm and i inserted it in the handle with the vise, then i welded in place.

Now the movable jaw i done, i can make the pad for the fixed jaw, so i measured and marked 30mm on the 20mm angle iron and i cut it and chamfer it with the angle grinder.

I clamp it in it’s place then i welded it.

I noticed that the sliding arm flex a little bit, a brace between the nut and the top of the clutch help a lot.