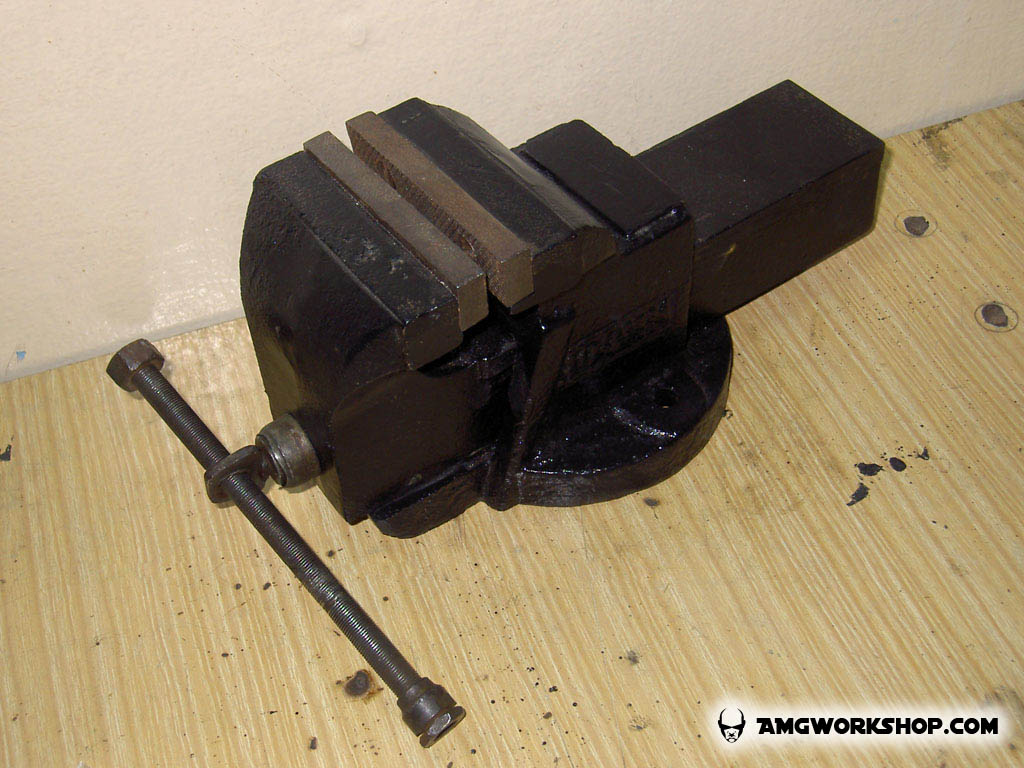 After the last attempt to make the nut bracket, i can say now that the idea is working, all i need to do now is shorten the nut and remake the bracket with a stronger corner steel.

As you can see from the picture below i shortened the nut by cutting it from the already mad hole, i cut it like this because i relocated the hole, i made it closer to the edge and the same process as before a 4 mm hole with a countersink.

I cut this bracket from a 30×30 mm corner steel with the same width as the first one, then i drilled the holes like the first time, i put the bracket in its position and i marked the holes location just by eye. And because the new bracket is taller than the first one i had to make a notch for the vise screw with the angle grinder.

I know, the bolt i used for the assembly is kinda weak for this task, but it’s just there until i weld everything together.

I had to chamfer the edge of the square hole the bracket is held against, because the of the inner shape of the bracket, but except that everything came together smoothly.

The bench vise is badly rusted and the paint is horrible, i couldn’t ignore a proper restoration, so it’s electrolysis time, for that i just filled a Bucket with water and same washing soda, and i used an old ATX as a power supply, i wired the vise base with the negative then hang it so it doesn’t touch the scrap metal i wired with the positive.

The process took too long and not all the paint is removed, the rust is no longer a problem now, it still there because i dried it with a heat gun,  but the paint is the problem that is really making me nuts, so moving to plan B.

Finely the shining surface, thanks to plan B the wire wheel brush and my small Makita angle grinder. It wasn’t as healthy as plan A but it did the job, now the paint is gone and the vise is ready for the new paint job.

I painted it black for two reasons, it’s my second favorite color and because it’s the only spray-can i have left in my workshop. The paint i used does not require primer that saved me a lot of work and it’s beautiful like that, it preserves the texture of the casted iron.

I didn’t paint the bracket and the nut, because i gonna weld them later, but i put on them a lot of grease.

The set screw collar is working as planned and the smooth surface of the big washer help it rotate with less friction when loosening the vise. All i can say about the bearing is it’s a great idea, it made a huge deference on the tightening facility and speed.

You may be wondering where is the handle, well, may be i just gonna use a long bolt.

I found this axle in my scrap box, it’s a bike wheel’s axle and it’s kinda perfect match for the whole project idea.

I cleaned it with the wire wheel brush, and i screwed it in.

An here is the final results, the bench vise restoration is Done! and i’am really surprised how well it’s working.

I think It still need a base, i could just bolt it like this but i want it to be able to rotate, so i gonna make a wooden base for it.